In 1993 Verner staged his frist solo exhibition in a local hotel and began painting full time. He was awarded a L.E.D.U. Artrepreneur award in 1995 and since then has not looked back. Over the past years Verner's reputation as a successful artist has grown, he has had a number of sell out exhibitions and has steadily increased in popularity among critics and collectors.

He travels on his motobike North and South of Ireland to photograph the landscape for his painting's, returning to spend many hour's in his studio working on them in his unique way. A traditional landscape painter with a modern twist, Verner has created a style that can truly be called his own. The scenes are built up in layers, first painted with brushs then reworked with a flat plastic card this process is used through each painting whether landscape or still life, creating a balance between colour, line and structure.

Recently I spent an evening in Verner's studio, the attention to detail within the landscape, which I knew from Verner's older work, had not disappeared but had been transferred to an interest in the effects of light and colour within the landscape itself. The majority of the paintings seem to concentrate on space and scale, on areas of light falling on the land, on objects and reflecting on water, the painted surface had been broken down into abstracted and hard edged areas of colour. If one looks at a particular area of a painting, it is immediately apparent that these works haven't been made quickly. Verner seems to have been continually adding and removing layers of paint to convey the subtle effects of light and at the same time creating a highly detailed and marked surface.


"Painting is trial and error, somewhere between this there is a balance in which a painting will work." 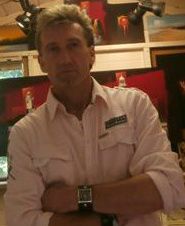 Work is also included in many hotels throughout N. Ireland.